Prior to joining the ASU music faculty, Swoboda was Associate Professor of Tuba and Euphonium at Western Michigan University where she was a full time member of the Western Brass Quintet.  Prior to WMU, Ms. Swoboda was tubist of the Dallas Brass, a 6-piece ensemble that travels the United States and Europe presenting hundreds of concerts each year and working extensively in the public schools and at colleges and universities. Swoboda is also the creator and performer of a motivational recruiting video and music workshop called “Band Blast Off.”

Swoboda has taught at the University of Nevada Las Vegas, at the University of Northern Iowa, University of Denver, University of Idaho.  As an international performer and clinician she has been a guest at the National Conservatory of Madrid (Spain), Deutschen Tubaforum–Hammelberg (Germany), The Higher School for the Arts in Porto, Portugal, and the St Petersburg Conservatory in St Petersburg, Russia. As a clinician and performer, Swoboda has appeared at the national and northwest regional conventions of Music Educators National Conference (MENC) on numerous occasions, the Midwest Band and Orchestra Clinic, International Women’s Brass Conference, The Army Band Tuba Euphonium Conference, International Tuba-Euphonium Conferences, and for state music educator associations.  Deanna Swoboda is a Past President for I.T.E.A., the International Tuba Euphonium Association.

Her mentors are Roberts Spevacek, Rex Martin and Sam Pilafian.

Her solo CD, “Deanna’s Wonderland,” was released on Summit Records in 1999.  Her solo CD is entitled “Shamanic Journey” and features the music of women composers.  “Table for Three” is a CD featuring music for low brass trio, recorded with ASU brass colleagues John Ericson and Douglas Yeo. It is available at Summit Records. “Fanfare and Flourish” is a tuba euphonium quartet recording featuring the music of women composers. It is published by Potenza Music and available at CD Baby.

Deanna Swoboda is a Tuba Artist for: 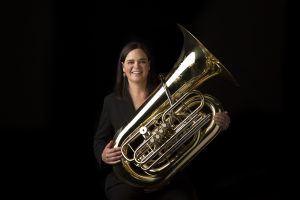